Why Do Gold and the U.S. Dollar Have a Strong Connection? 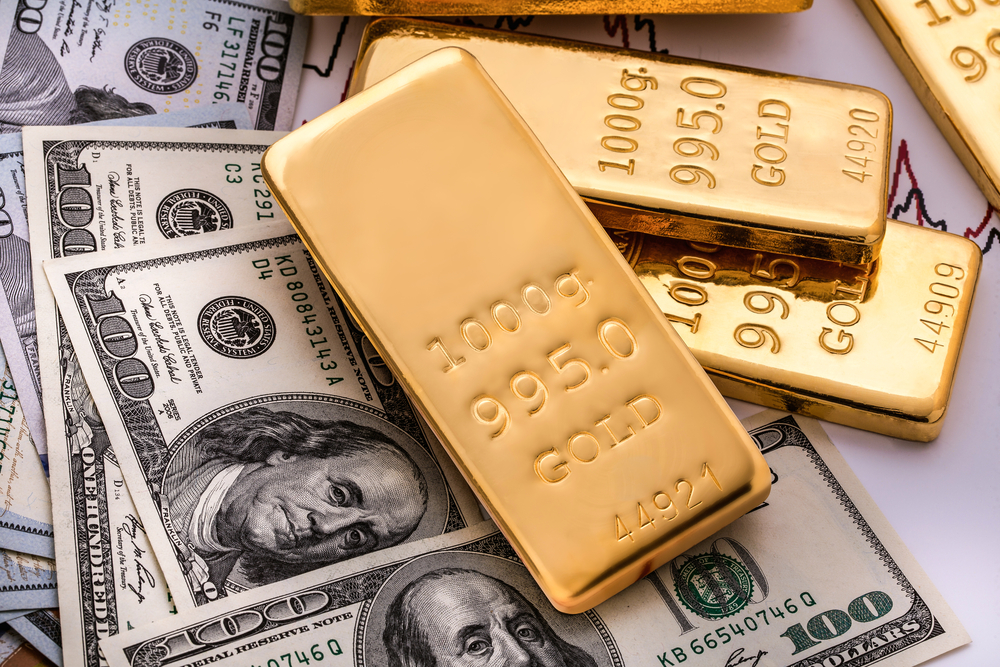 Gold prices and the U.S. dollar have a long history together that makes them two of the most popular benchmarks as safe haven assets. Gold prices are generally quoted in U.S. dollars. Gold has a long and robust history. It was initially used to signify wealth in jewelry until about 1500 BC.

After this period and until the 1970s, gold was considered the reserve currency benchmark throughout the world. Countries would tie their currency to the price of gold. In the 1940s, the U.S. dollar became the world’s proxy as a reserve currency, relieving gold as the benchmark.

The History of Gold

Initially, gold was used for idol worship and jewelry. Around 1500 BC, gold became a medium for trade in exchange for goods and services. Gold was used in Egyptian coins called shekel, the first coins in ancient Egypt.

In 560 BC, the Kingdom of Asia Minor started creating the first pure gold coins. About 500 years later, The Romans began issuing gold coins called aureus, which is the basis for the chemical symbol AU for gold.

The next milestone in the timeline for gold was approximately 1000 years later as the first Norman King of England, William the Conqueror, started a gold-based coin system used for currency in England. This coin-based system became the backbone of England’s currency pound and shilling system.

The Gold Standard was a system that used gold to back currency. For example, there was a time when one U.S. dollar was worth a fixed amount of gold. This situation compares to the current system in which gold and the U.S. dollar float freely in the marketplace.

The gold standard started to fracture during the beginning of World War I. Nowadays, the gold standard has been abandoned throughout the globe. The process of leaving gold as a benchmark occurred gradually.

During World War I, countries around the globe needed to print new currency to be able to pay for the war. Nations came off the gold standard in order to be able to generate the money required to finance their activities, which caused severe inflation.

In the wake of the war, countries wanted to return to the stabilization of the gold standard, but the volatility of the market and the change in debt made the return to this standard challenging. The Great Depression eventually was the catalyst for the end of the gold standard. The stock market crash and the lack of commerce made a global standard based on gold nearly impossible.

Gold experienced hoarding during the great depression as consumers lost faith in paper money and banks. In 1934, the Gold Reserve Act was passed. This new law restricted private ownership of gold. All gold was expected to be turned over to the government.

The law allowed the U.S. government to pay off its debts in dollars instead of gold, as it had all the gold available in the United States. During the Second World War, countries moved back to the Gold Standard.

The End of Gold as a Reserve Currency

In 1971, U.S. President Richard Nixon announced the temporary suspension of the dollar conversion into gold. During Q1 of 1973, the major currencies around the globe started to float, as the fixed rate to gold prices completely broke down.

The Relationship Between Gold and the Dollar

The relationship between gold and the U.S. dollar continues to flourish in the years since the Brenton Woods agreement. As the dollar became recognized as the reserve currency throughout the world, the value of gold was viewed in dollar terms. In 1974, the first gold trading of futures contracts started on the COMEX Exchange.

A futures contract is the obligation to purchase a physical (or financial) product at some date in the future. Gold futures contracts started to increase in popularity, making gold quoted in the dollar more critical. Gold prices are quoted in dollars at most locations throughout the globe. Therefore, the relationship between the U.S. dollar and gold is closely related.

As the exchange rate of currencies around the globe weakens relative to the U.S. dollar, the cost of gold quoted in dollars rises. The reverse is also true. As the exchange rate of the U.S. dollar declines, the price of gold quoted in dollars drops. The inverse relationship means that the dollar and gold usually move in opposite directions. They are considered negatively correlated with each other.

The Safe Haven of Gold and the Dollar

While gold prices and the dollar exchange rate generally do not move in tandem, they are both considered “safe haven” assets when adverse market conditions occur.

Gold has a long history as a currency. Gold was traded as a medium of exchange as far back as 1500 BC. Gold was eventually turned into coins and exchanged for goods and services, eventually becoming the global benchmark for paper money. It was used as a way to back a currency. For example, each dollar issued was based on a fixed amount of gold.

Gold retained its global benchmark status in the first World War. During this period, the need to print paper money to afford the war sidelined gold as a reserve currency. The Bretton Woods Agreement was implemented in 1944, which led to the enhancement of the dollar as a reserve currency. In 1971, the agreement broke down, and gold and the dollar started to float in the marketplace.

Gold prices and the U.S. dollar exchange rate generally move in opposite directions. This relationship exists because most gold traded worldwide is quoted in U.S. dollars. As the dollar value rises, gold prices become more expensive in other currencies and need to adjust to keep gold prices stable.

Dollar Suffers after US Jobs Report
Previous ArticleThinking about Investing in a SPAC?