The USD/JPY trading pair is holding on tight to a 20 pip range currently in the Asian markets. At the time of putting this piece together, the pair was trading at 114.85. The ongoing war between Russia and Ukraine has continued to take its toll on European and American stock markets, and the American bond yields have fallen sharply as risk appetites in the market have rapidly waned. Nevertheless, the American dollar saw very little net change in comparison with its co-safe-haven currencies, the Japanese Yen and the Chinese Yuan, but it appeared stronger on the dollar index. 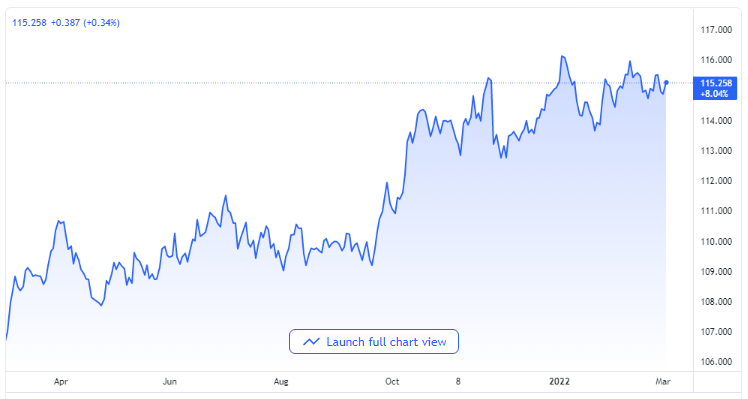 The dollar index was trading above 97.50, and it is presently holding in the premise of 97.40 while the financial market is desperately cutting down on expectations for the Federal Reserve policy tightening as the 23rd December Federal Funds Futures contract was able to rally 25 basis points.

The markets are, however, bracing up for an extended conflict that will see support increased for the US dollar. Old expectations for a 50 basis point increase in the Federal Reserve’s interest rate this month have gradually faded away, and a lot of investors are moving towards the US Treasury for safe-haven coverage in the midst of declining liquidity.

Meanwhile, the American bond yields dropped significantly after the expected decline in global risk appetite as the war between Russia and Ukraine continued to rage on without an end in sight. There was a steep rise in the economic curve as the two-year government bond yields dropped from 1.45% down to 1.34%, and the ten-year government bond yields equally dropped from 1.86% down to 1.68%. This comes to be the lowest drop to have occurred since the early days of January.

In the meantime, the Federal Reserve’s Chair, Jerome Powell, is expected to appear before the House Financial Service Committee to testify and deliver the biannual Monetary Policy Report before Congress. It is also likely that there will be some focus on the Automatic Data Processing employment change that is expected to have a rebound from the decline inflicted on it by the Omicron variant of COVID-19 in January.

It is, however, scheduled to show up before the Non-farm Payroll report is due to be out by the end of the week. Another data to be looked into for more updates about the present economic situation is the Federal Reserve’s Beige Book. But before that also comes up, all eyes will be fixed on US President Joe Biden for his first State of the Union address. He is expected to talk about the situation in Ukraine and to address the growing cost of living.